Industrial robots can be found now a days almost in all industries without any exception , Capabilities of industrial robots to work in harsh environment without being shut-down or without needing daily maintenance giving an impact to the maintenance staff that these machines/robots do not need any attention from their side !

In realty ; Robots are just a combination of mechanical & electrical/electronics components running under controller commands ; In this blog we will summarize the importance of performing preventive maintenance as per general manufacturer's recommendations for protecting robot gears from any damages or malfunction.

Robot reduction or harmonic gears are the responsible parts for delivering servo motors power to the robot links with very high accuracy and minimum backlash .

Same like all gears in most of the machines ; The manufacturer will try to eliminate the friction between different gears connections (like rack & pinions) by adding grease or oil inside the gearbox (Robot Joint) .

Each manufacturer is using a different type of grease or oil depending on his design , robot payload & ambient temperature requirements .

Robot joints grease/oil must be replaced/replenishment every certain amount of running hours (Robot moving hours) in order to make sure that robot gears will stay healthy for continuous operation .

When the grease will loose its viscosity ; The friction between different gears inside the gearbox (Robot Joint) will be increased causing gears to start "eating each other" by the meaning of destroying each other due to friction .

This battle between gears due to friction yields to mix the grease with gears particles & the new mixture will be almost with black color (This phenomena known as : Dissolved Grease Particles) .

Down picture which toke from a customer robot in UAE shows the difference in color between new grease & existing grease inside robot joints : 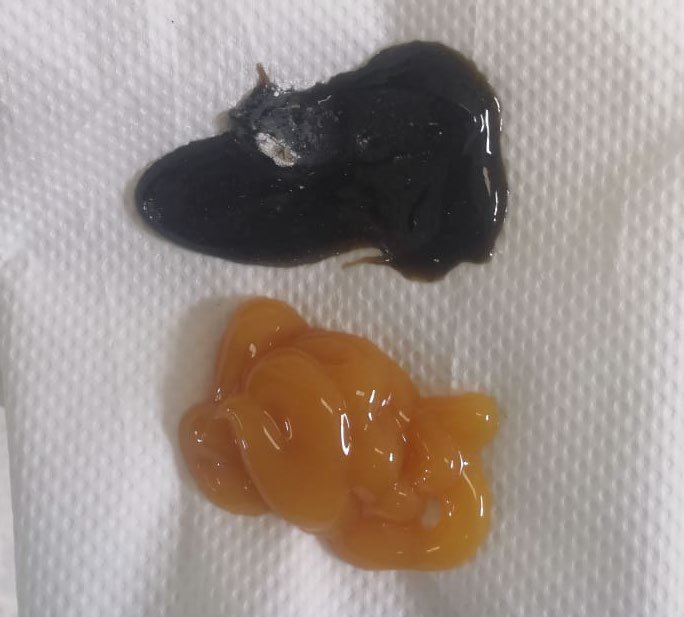 This effect can be shown in more details inside the robot gears as illustrated in below picture .

By ignoring robot grease replenishment ; More frictions will happens inside the robot joints which will yield to gear backlash then damaging the gearbox completely .

One of the common mistakes that maintenance staff doing it is trying to fill or replenish the robot grease by themselves without any background about robot structure or its specific greasing requirements .

Also ; The grease filling or feeding to the robot joint should be done in a very specific way by applying certain amount of pressure (if using air pump) within specific time  , counting the amount of grease pumped inside the joint , monitoring the outfeed of existing bad grease with additional conditions like moving the robot & clearing over pressure paths inside the robot joint .

Robots preventive maintenance for gears should be done only by certified maintenance engineer from the manufacturer itself.

Small mistakes in grease replenishments or ignoring it will cost the company a lot of money by loosing their operation till securing a replacement gear in addition to the cost of gear itself & manhour cost for the certified engineer to do it.